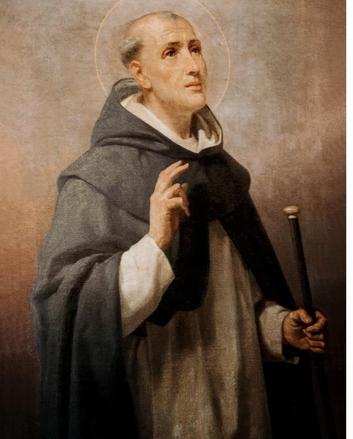 On Nov 02, 1274 – The Holy Name Society was founded by Blessed John of Vercelli, who is considered as the world wide patron and founder of the Holy Name Society. Born in 1205 John Garbella was born in Vercelli, in a small town of northern Italy called Mosso Santa Maria, which is approximately 350 miles north of Rome.

Officially ordained as a priest at the age of twenty five, throughout his life of 78 years, Blessed John of Vercelli, worked faithfully under nine popes, and held many high positions such as General of the Dominican Order, Prior of Vercelli, Vicar General of Hungary, Prior of San Nocolo, and even Archbishop. John also had a remarkable gift of peace-making and because he succeeded so well, that for the rest of his life, the various Popes made use of his sanctity, prudence and diplomacy to establish peace between warring rulers and various states.

On September 7, 1903 John Garbella was beatified, and several attempts have been made so far to have Blessed John of Vercelli canonized starting in the 1950’s.  In 1564 Digeo of Victoria, a Dominican Friar, wrote the first constitution of the Holy Name Society, and Pope Pius IV raised the society to the canonical status of a confraternity, endowing it with privileges and indulgences. Note: The Holy Name Society is probably the most indulgenced body in the Church.

Please provide financial support  for the "Canonization of Blessed John Committee " by writing to The National Association of the Holy Name Society - The Blessed John of Vercelli Committee P.O. Box 16955, Baltimore MD 21206 USA

Some people consider Blessed John of Vercelli one of the world’s greatest historical peacemakers.

He was the son of a dairy farming family who had lots of farm land and sheep, and the wool from the sheep was turned into "wealth" in one form or another. John was 5'8" tall, had a noticeable pointed chin, and northern Italian features such as blue eyes. In all of his works, John turned to God through prayer and the sacraments as his source of remarkable success in the vineyard of the Lord".

Blessed John took a vow not to ride any type of animal, therefore he usually walked barefoot, even though had a limp on his right side. John used a walking stick everywhere he went – as this walking stick was his symbol. Note: If we actually laid every mile, end to end, that he walked during the last nine years of his life, he walked around Europe approximately three (3) times.

Throughout his life, John was obedient to nine Popes and he presided at 20 General Chapter Meetings.

John was credited with saving the very important writings of St. Thomas Aquinas.

John's remarkable gift of peace-making became evident, and he was sent to reconcile various conflicts. He succeeded so well at this that for the rest of his life, the Popes made use of his sanctity, prudence and diplomacy to establish peace between warring rulers and various states.

1205 – John Garbella was born in Vercelli, in a small town of northern Italy called Mosso Santa Maria, which is approximately 350 miles north of Rome. He was a very bright, studious boy, and because of his great promise, he was sent to the University of Paris in France where he eventually gained his Doctorate in law.  Transferred to Bologna, Italy to study the history and theology of the Order and for the priesthood.
1229 – John was officially ordained as a priest, and was a noted preacher in Bologna.
1230 - Received into the Dominican Order by Blessed Jordan of Saxony, successor to St. Dominic who founded the Order.
1232 - John returned to Vercelli to establish a Dominican priory, and to serve as its superior. Peacemaker between Venice and other Papal States
1245 - Prior of Vercelli (Prior is an officer or chief)
1255 - Vicar General of Hungary (Vicar General is a priest deputized by a bishop to assist in administration)
1256 - Prior of San Nocolo in Bologna (St. Dominic is buried in Bologna)
1257 - Provincial of Lombardy
1257-1264 - 6th Master General of the Dominican Order - As Master General, he personally visited, and on foot, all of the houses of the order except those in Spain.
1264 – 1283 Master-general of the Dominicans. Insured uniform liturgical celebration throughout the Order. Served at the papal court of Pope Clement IV. Considered for the papacy after the death of Clement; when he learned of this, he fled the city. Pope Gregory X was elected instead
Nov 2, 1274 - From the Council of Lyons, the Holy Name Society was founded. Blessed John of Vercelli is considered the world wide patron and founder of the Holy Name Society.
1278 - Appointed as the archbishop of Jerusalem, but later begged to be released from the responsibility, citing advanced age, ill health, and the need for strong, vital leadership in the war-ravaged region.

1280 - Blessed John of Vercelli was appointed by the Pope as Nuncio to the courts of France and England. He visited Normandy, England, Scotland, Ireland, Holland and Switzerland during that time.

1562 – His body was either destroyed or disappeared in a religious war when his tomb was desecrated by Calvinists. However four relics of his walking stick remain today. The National Association of the Holy Name Society has a relic, which is two inches of the back of the walking stick. Another portion of the walking stick is in a shrine in New Orleans, Louisiana, a small "splinter" is in a Church in Pittsburgh, PA, and the balance of the walking stick is located in a monastery in Vercelli, Italy. December 1st - Feast Day of Blessed John of Vercelli
1564 Digeo of Victoria, a Dominican Friar, wrote the first constitution of the Holy Name Society, and Pope Pius IV raised the society to the canonical status of a confraternity, endowing it with privileges and indulgences. The Holy Name Society is probably the most indulgenced body in the Church.
September 7, 1903 John Garbella was beatified, at the request of the Bishop of Vercelli, and his Cultus or Devotion was approved at that time. [In spite of the fact that his corpse was not available for inspection - sometimes God grants the grace of preserving the body of a saint from decay, and the Church uses this as one indicia of a person's sanctity], at the request of the Bishop of Vercelli, by Pope Pius X.
1950’s - The initial attempt to have Blessed John canonized took place in the early 1950's
1961 - A second attempt occurred in 1961
1972 – A third attempt occurred in 1972
1979 – A fourth attempt occurred in 1979 and is still ongoing.

Interesting Fact: Tradition says that during the translation of the relics of Saint Dominic de Guzman 1267, when the body was exposed to view, the head was seen to turn towards Blessed John. Being embarrassed, John moved to another part of the church, giving his place to a cardinal. The head of Saint Dominic was seen by all to turn again toward John.

Prayer: God of power and mercy, you made Blessed John an outstanding promoter of the order of Preachers. By his remarkable zeal, his wonderful prudence and his courage and with the help of his prayers may your family always and everywhere be governed by beneficial rule. We ask this through our Lord Jesus Christ, your Son, who lives and reigns with you and the Holy Spirit, one God, for ever and ever.

Opening Prayer
Grant me, O merciful God,
to desire eagerly,
to investigate prudently,
to acknowledge sincerely,
to fulfill perfectly
those things that are pleasing to you,
to the praise and glory
of your Holy Name. Amen

Blessed be God.
Blessed be his Holy Name.
Blessed be Jesus Christ true God and true Man.
Blessed be the Name of Jesus.
I believe, O Jesus,
that you are the Christ, the Son of the living God.
I proclaim my love
for the Vicar of Christ on earth.
I believe all the sacred truths
which the holy Catholic Church believes and teaches.
I promise to give good example
by the regular practice of my faith.
In honour of his Divine Name,
I pledge myself against perjury, blasphemy,
profanity, and obscene speech.
I pledge my loyalty to the flag of my country,
and to the God-given principles
of freedom, justice, and happiness for which it stands.
I pledge my support to all lawful authority,
both civil and religious.
I dedicate my life
to the honour of the Sacred Name of Jesus Christ,
and beg that he will keep me faithful
to these pledges until death. Amen.

"BLESSED JOHN OF VERCELLI -  PRAY FOR US"